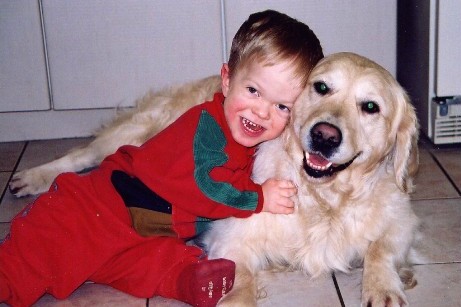 In 1985 I began a journey into the world of Golden Retrievers. It started with one Golden Retriever who could do it all. Tasha was bred by Ainslie Mills and went on to become Can Ch Oriana Fantasia Can CDX, WCI. She was also trained for tracking and Utility but never completed those titles nor did she get an official title for being able to eat two cups of food in 12 seconds, or champion foot warmer and palpation dog (I was in my second year of vet school when she arrived). She was beautiful and smart and lived to be two days short of 15 years. She has inspired a quest to breed for beautiful, healthy dogs that can do it all. The first Tashora litter came from Can Ch Glendavis Rainbow’s Gold Can CD. Nugget was bred by Charlotte Davis. Nugget, Nuggie, Snug-a-Bug was a beautiful, sweet girl who loved to curl up on the couch and doted on her babies and, later, our children. 1993 brought our first English import Golden Retriever Can Ch Amirene Unique. Niqui was bred by Margaret Woods and co-owned with Kathryn Mitchell. She brought everything to our breeding program that I so admired about the British style of Golden Retriever. She had a foolproof temperament, beautiful structure and an absolutely melting expression. Niqui produced two beautiful litters and is behind all of the current Tashora Golden Retrievers. Our second import, Radar (Can Ch Stanroph Secret Weapon CD), is also behind all of our current breeding dogs. We breed occasional litters of puppies with primarily overseas pedigrees from parents that are health certified. Our dogs range in colour from very pale to medium gold and live peacefully together on our small acreage. I am a member of the  Golden Retriever Club of BC and the Golden Retriever Club of Canada and  lifetime member of the Canadian Kennel Club.